We are extremely pleased to announce our new Ambassador, Samantha Hayes.

Samantha Hayes is a broadcast journalist with more than 15 years experience presenting live news and current affairs shows in New Zealand. She currently co-anchors Three’s flagship news programme Newshub Live at 6pm with Mike McRoberts, a role she’s held for more than six years. Her journalism also features in the flagship programme and in the documentary series Newshub Investigates. Samantha has traveled the world reporting on everything from climate change research in Antarctica to sea level rise in the Pacific, the Syrian war’s refugee crisis and the role of former poachers in Kenya’s rhino protection programme.

Her path to anchoring the 6pm news began as a 17 year-old journalism student, when on work experience for the cult evening news show Nightline she landed an international scoop. She would go on to present the popular show at the age of 23 making her the country’s youngest ever newsreader at that time.

Samantha says she cannot dance, but with the guidance of dance partner Aaron Gilmore somehow managed to learn the steps required during the 2018 season of Three’s Dancing with the Stars to win the mirror ball trophy. New Zealand Riding for the Disabled was her chosen charity and through the public’s votes Samantha and Aaron raised more than $120,000 for the charity.

Samantha is now an enthusiastic ambassador for NZRDA saying the positive impact it has on people’s lives is immeasurable. “Having seen first hand the smiles on children’s faces and the sense of pride in the volunteer’s eyes I’m excited to officially join NZRDA as an ambassador as the organisation celebrates its 60th anniversary. Just think how many lives can be changed for the better in the next 60 years with the support of Kiwis around the country.”

Samantha has been a big supporter of NZRDA over the years and we’re looking forward to working alongside Samantha to continue to reach more riders and change more lives.

How does riding support individuals with autism?

Jason Moses is competing for NZRDA in the 2020 Coast to Coast...

Anne is achieving her goals

HorseCare NZ is supporting Riding for the Disabled in New Zealand...

Caring for Horses during Lockdown

Let’s look at how to support our equine friends’ wellbeing during...

It’s The Best Classroom – On The Back Of A Horse!

Click here to read the radio interview with Donna Kennedy on... 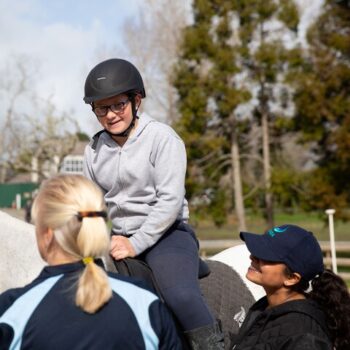 The value of a coach is enduring. The benefit continues for...

You can get a tax refund for your donations. Introducing Supergenerous...

Rider of the Year

8-year-old Ruby is NZRDA Rider of the Year Congratulations to Ruby Fitzgerald...

The fortune teller can answer your questions about volunteering!